Following is the story of why I and four others engaged in an act of civil resistance at BNSF Delta Yard in Everett, Washington September 2.  The act was intended to draw attention to a Petition for Redress of Grievances Inflicted by Fossil Fuels.  Please sign our petition here.

I am a veteran climate activist.  I have written about the climate crisis for over 25 years and for most of the last 15 worked full-time to advance climate solutions.  I have spent a lot of time trying to stop global warming sitting in front of a computer.  On September 2, 2014 it was time to sit in front of a train.

Five of us attached ourselves to a tripod made of three 18-foot steel poles erected across a train track at Delta Junction, the north end of BNSF’s Everett Delta staging yard.  I locked myself at the foot of one of the poles.  School teachers Liz Spoerri and Jackie Minshew and coffee shop owner Mike Lapointe fastened themselves to the others. Abby Brockway, a house painter and artist, ascended to perch at the top. 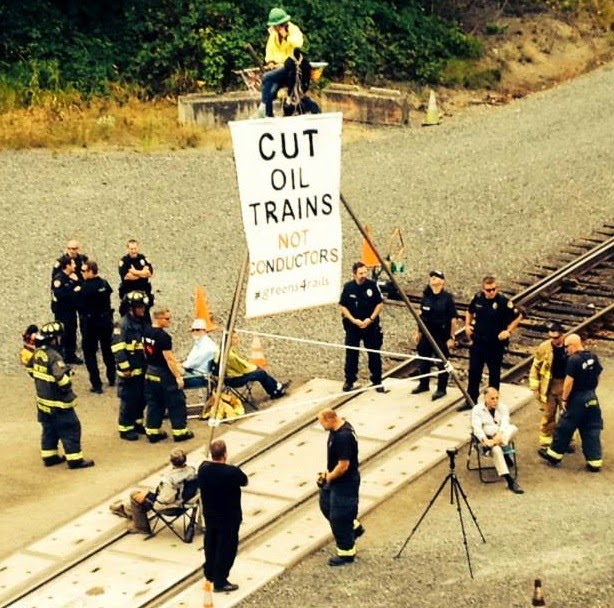 Our banner, “Cut Oil Trains, Not Conductors,” expressed solidarity with railroad workers fighting against dangerous, single-person train crews.  During the day the action drew numerous supporting honks from truckers driving across the bridge above.

Around 150 yards to the south an orange BNSF engine was linked at the head of a black mile-long snake of tanker cars filled with North Dakota Bakken shale oil.  This is the same extraordinarily unstable crude that on July 6, 2013 leveled several city blocks and incinerated 47 people at Lac-Megantic on the Quebec-Maine border.  That exploded in fireballs after derailments October 19, 2013 in Edmonton, Alberta and November 8, 2013 in Aliceville, Alabama. A derailment and fire December 30, 2013 in Casselton, North Dakota erupted in a toxic plume that forced evacuations in a five-mile radius.  Another Bakken train derailed and was engulfed in flames January 7, 2014 in Plaster Rock, New Brunswick.

Every week oil trains each carrying up to three million gallons of volatile Bakken crude trundle through Seattle 8 to 13 times and Washington up to 19 times, according to BNSF’s own figures. Sightline's Eric de Place reports that oil unit train traffic through Washington has risen from essentially zero in August 2012 to an average of 2.6 trains a day. They run past stadiums and heavily populated neighborhoods, and through tunnels underneath Seattle and Everett.  Just this July 24 a nearly 100-tanker train derailed beneath the Magnolia Bridge in Seattle.  Fortunately no toxic fireball . . . this time.

This is part of a trend to dig and drill for unconventional fossil fuels such as oil shales and tar sands that release even more carbon into the atmosphere than regular petroleum.  Production and shipping have gone exponential. The past decade’s stratospheric oil price rise makes unconventional fossil fuels more competitive.  Forest Ethics puts it in perspective:  “In 2008, only 9,500 rail cars of oil were transported on America’s Class I railways. In 2013 there were an estimated 400,000 rail cars of oil. In only six years, oil-by-rail has increased 4,111%. During that same time, the Pacific Northwest went from having zero oil-by-rail facilities capable of receiving massive oil trains, to four functional and six proposed terminals as of the end of 2013.”

The visceral threat of oil train explosions and the very real hazard of coal trains spewing trails of health-destroying coal dust underscore the peril of building our economy on fossil fuels, even leaving aside the danger of spills into Puget Sound.

But the greater peril by far is global warming and the resulting climate disruption that is now becoming so visible.  The twisting of our atmosphere by fossil carbon pollution is ramifying across the globe. From the Southwest to India droughts are spreading and becoming more frequent, causing a global food price explosion.  From Katrina to Sandy and beyond storms are intensifying. As soon as summer 2016 the Arctic Ocean might be ice-free, a U.S. Naval Postgraduate School study says.   That would be the first time in at least 700,000 years.  Carbon pollution impacts are accelerating at a more rapid rate than was predicted even just a few years ago. 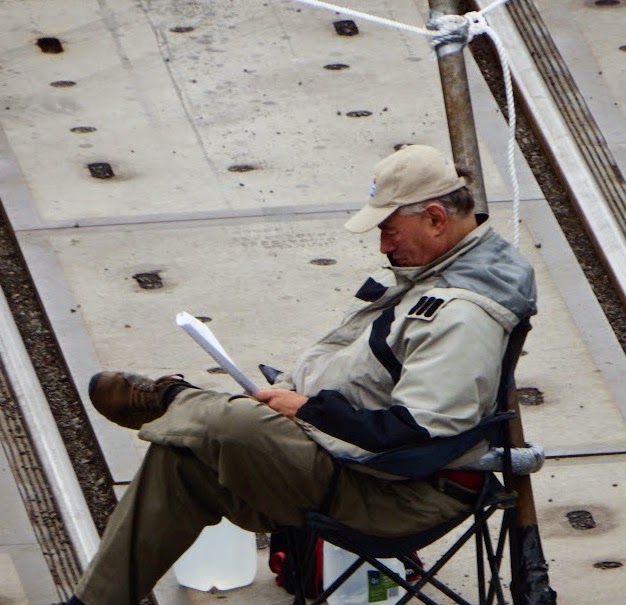 Catching up on my reading at Delta Junction

Just this year in the Northwest a month of intense rainfall triggered the March 22 Oso, Washington landslide killing 43 people. The July 2014 Carlton fire burned a quarter-million Eastern Washington acres making it the largest wildfire in Washington history. A month later storm-induced mudslides shut down highways in the area scorched by fire. On August 19 drought covered 40% of Washington state.  Global warming's fingerprints are all over these events.

Ocean acidification is another consequence of carbon pollution. Today oceans are 30% more acidic than when we started mass fossil fuel burning.  By the end of this century they will be more acidic than any time in the last 50 million years if we continue on our current trajectory.  That is driving the shellfish industry away from the Puget Sound, a global ground zero for ocean acidification.

The world’s most important climate science assessment, that of the U.N. Intergovernmental Panel on Climate Change, says, “Global warming already is affecting ‘all continents and across the oceans,’ and further pollution from heat-trapping gases will raise the likelihood of ‘severe, pervasive and irreversible impacts for people and ecosystems,’” Bloomberg reported Aug 27. The document leaked to Bloomberg says that unless humanity deeply reduces its use of fossil fuels,  “warming by the end of the 21st century will lead to high to very high risk of severe, widespread, and irreversible impacts globally.”

This is a world going off the rails.  A world where fossil fuel production and shipping are expanding while dust bowls are spreading, polar ice is vanishing, and sea level rise dooming coastal cities is irreversibly locking in.  This is the world where I went on the rails and locked down, a direct action to bear witness that we must rapidly transition from fossil to clean energy in order to leave our children a world with which they can cope.
Over the years I have earnestly tried to work through the system.  I have helped forward carbon-reducing solutions from smart grids driven by solar and wind energy, to electrified vehicles and sustainable fuels, to carbon-storing forestry and farming. I have seen phenomenal breakthroughs in clean energy technologies including solar panels and wind turbines that give me confidence we can eliminate the climate-twisting carbon pollution that comes from burning fossil fuels.

Through research, writing and stakeholder processes I have worked to build community knowledge and consensus around these solutions.  I have seen some stunning successes that made real change on the ground.  I will continue to pursue these pathways because they work.  Even if I have added direct action to my repertoire I am not done sitting behind a computer.

But alone it’s not enough.  I can no longer see a track to bringing down carbon pollution fast enough to avert catastrophic consequences for our world and our children if we rely only on incremental change.  We need very rapid reductions in use of fossil fuels.  The best scientific assessment says that to stop trapping more and more solar heat in the Earth system by 2100 we need to begin cutting carbon emissions around 6% a year now.  That calls for a global agenda with an investment of resources on a scale we have not seen since World War II.  We need to treat the climate crisis as an existential threat to ourselves and to our children’s generation, and rise to the challenge with the response that is due.  This is not just another issue on the plate.  It’s about whether we have a plate at all.

Over the years I have worked with many people sincerely committed to turning around the climate crisis.  I ask you to continue everything you are doing, as I will continue doing everything I have been doing.  But we need to do more.  We need to match our words and deeds to the scale of the crisis.  I invite you to join me and engage in nonviolent civil resistance, to put your bodies on the line to say enough is enough.  It is time to end the fossil fuel age as quickly as is humanely possible.

As I looked from my position at the base of the tripod, I saw a sign that identified the place as Delta Junction, so named because it is on the Snohomish River delta.  I thought about the nuanced meaning of the word.  In scientific terms, the delta is the change marked by the divergence of two lines, signified by the fourth letter in the Greek alphabet. In a literal sense, our tripod was a delta shape rising from the flat surface of the rail yard to the sky above.  It was a fitting place and form to call for a delta, for a change from everything represented by those oil trains - A fossil fuel economy driven by concerns for the bottom line and nothing else expanding in the face of an overheated and disrupted climate.

After eight hours at Delta Junction the five of us were extracted from the tripod.  The Everett Fire Department cut out the four at the base with the jaws of life, and bucketed out Abby, certainly the one of us who took the greatest physical risk.  We spent a night and day in the Snohomish County Jail (an educational experience in its own rite) and face several charges.  We are ready to accept the consequences, whatever they might be.  You can donate to our legal fund here. 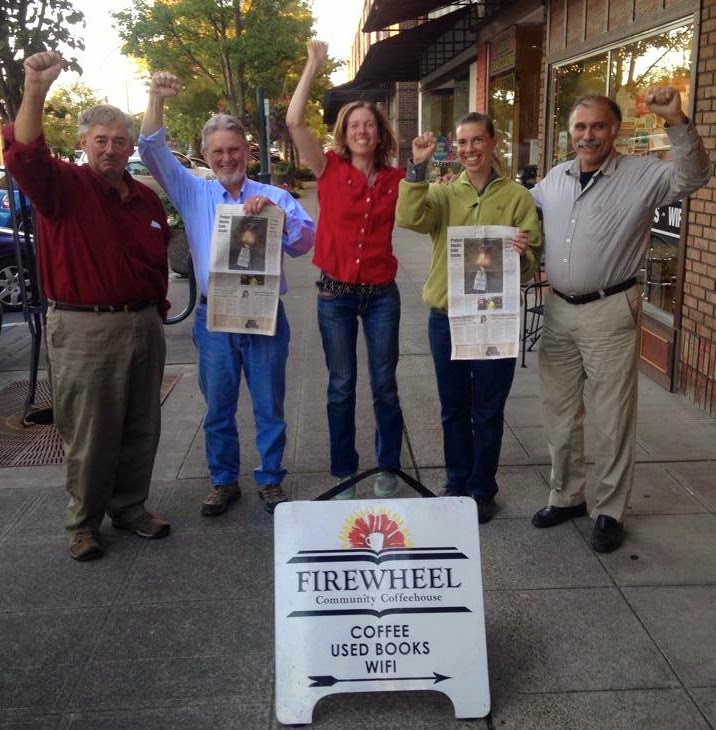 I had a special reason for taking action September 2. It was my last act as a father before my daughter reached full adulthood.  Her 18th birthday was September 3. When she reaches my age 43 years in the future, the world will be hotter, more storm tossed and troubled. Rising seas will be drowning coastal communities. We have already laid a heavy footprint on the world in which she and her generation must live. It is up to us of the parental generation to do our absolute best to leave the least climate disrupted world we can, to put our bodies on the line to give our kids a fighting chance to deal with what we have left them.

In 1967, speaking to the crisis of his time, Martin Luther King spoke words that could not be more relevant to our own:  “We are now faced with the fact that tomorrow is today. We are confronted with the fierce urgency of now. In this unfolding conundrum of life and history there is such a thing as being too late.”
It is not too late for us, but a day could come all too soon when it will be if we do not rise to the fierce urgency of our time.  We are called to act with everything that is in us, to put our bodies where are minds are, to take the future in our hands and do our best to save our children’s world.  The question has never been more on point: If not us, who, and if not now, when?

Listen to an interview with me and Liz on The Dissenter.

Watch the KING5 coverage of the action.

Connect with Rising Tide Seattle to stay posted on the movement against oil and coal trains.