In her seminal This Changes Everything Naomi Klein is looking for the force that will do just that, politically and economically, before business as usual changes everything about the climate and the world’s ecosystems.  She finds answers in a coalescence of the past two centuries’ great progressive movements, all of which have “the intrinsic value of life . . . at the heart  . . .“ Climate can be the driver that completes the unfinished business of those movements, Klein writes.

The movement to abandon use of fossil fuels parallels the 19th century movement for abolition of slavery and the 20th century movement for independence of former European colonies.  “Both of these transformative movements forced ruling elites to relinquish practices that were extraordinarily profitable, much as fossil fuel extraction is today,” Klein notes. Even the value of the slaves that were freed in the Civil War roughly equates to the value of coal, oil and natural gas that must be left in the ground to avert catastrophic climate disruption and ocean acidification – around $10 trillion.

But these progressive revolutions left unfinished business.  The freed slaves never received 40 acres and a mule. The economic disempowerment of African America remains a stark fact today.  Redistribution of lands and wealth did not follow colonial independence.  Postcolonial governments that tried to redistribute wealth were undermined by coups, assassinations and bank-imposed austerity schemes. 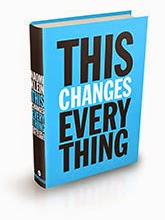 Heroic social justice movements have secured legal rights and won cultural battles, Klein writes, notably civil, women’s and gay and lesbian movements.  But they have been less successful on the economic front.  The New Deal labor movement is an exception, as are social movements that built strong public services.  But these are being pushed back.  Klein looks to a turnaround and advance in a new progressive coalescence that secures economic justice by addressing climate necessities.

Klein’s fundamental point in This Changes Everything is that the time for gradual change in economies has passed.  Humanity has dumped too much climate disrupting carbon in the air.  Emissions reductions of 8-10 percent annually are needed in industrialized countries to stabilize an increasingly turbulent climate.  This will require deep changes in economic systems.  Making these changes offers a chance to complete the unfinished work of economic justice.  Klein frames this as a Marshall Plan for Earth.

“The massive global investments required to respond to the climate threat – to adapt humanely and equitably to the heavy weather we have already locked in, and to avert the truly catastrophic warming we can still avoid – is a chance  . . . to get it right this time.”

Winning means beating the foe of all movements for the “intrinsic value of life” including climate, the extractivist worldview that sees land, waters and people only as opportunities to extract wealth.  The contrast is an economy that regenerates life. She gives many examples, prominently initiatives for clean energy and green jobs at local levels from Native reservations to German municipalities.  Bringing resources back to communities, enabling them to build their own sources of sustenance, is the key.  That can come in land redistribution, restored public services and institutions, and good housing, as well as solar panels and wind turbines.

“So climate change does not need some shiny new movement that will magically succeed where others failed.   Rather, as the furthest-reaching crisis created by the extractivist worldview, and one that puts humanity on a firm and unyielding deadline, climate change can be the force – the grand push – that will bring together all these still living movements.”

Climate Movement 1.0 culminated in the unsuccessful push for a federal carbon cap in 2009-10.  The climate bill was stuffed with nuclear and “clean coal” subsidies and tied to a carbon offset market that would have allowed polluters to substantially avoid direct emissions reductions into the 2020s.  Even support for offshore oil drilling came into the Senate bill.  Klein correctly concludes that failure to pass that bill “should not be seen, as it often is, as the climate movement’s greatest defeat, but rather as a narrowly dodged bullet.”

Klein skewers the process that created the bill, the U.S. Climate Action Partnership of Big Green groups such as Environmental Defense Fund and big polluters.  The severely compromised legislation gave a free pass to 90% of power plant carbon pollution and set carbon caps far short of what it would take to avert disastrous global warming.  The U.S. Environmental Protection Agency would have been barred from regulating power plant pollution.  Ironically, EPA is now moving to do just that as the result of a U.S. Supreme Court decision.  In the end, the polluters jumped ship when they saw the legislation crippled by lack of Obama Administration support.

Despite spending nearly a half billion of Green funder money to support the legislation, the climate movement also lacked much of a grassroots base, Klein writes. It was more focused on elites.  She quotes Harvard University sociologist Theda Skocpol.  “To counter fierce political opposition, reformers will have to build political networks across the country, and they will need to orchestrate sustained political efforts that stretch far beyond friendly Congressional offices, comfy boardrooms, and posh retreats.”

In other words, the climate movement would have to move beyond the suites and out onto the streets.  Notes Klein, “a resurgent grassroots climate movement has now arrived and is doing precisely that – and it is winning a series of startling victories against the fossil fuel sector as a result.“ This more grassroots and democratic movement is where Klein sees hope.

“When I despair of the prospects for change, I think back on some of what I have witnessed in the five years of writing this book,” Klein says.

“When I started this journey, most of the resistance movements standing in the way of the fossil fuel frenzy did not exist or were a fraction of their current size. All were significantly more isolated from one another than they are today.”

Now, resistance to extreme fossil fuel extraction and infrastructure, to tar sands, fracking, coal ports, oil trains, etc., draws in Native people, farmers, faith communities, local public officials and civic groups.  The direct action movement Klein dubs Blockadia is sprouting across the map, “’friction’ to slow down an economic system that is careening out of control.”  Universities, cities and foundations are facing and responding to determined citizen movements demanding divestment from fossil fuel stocks.  In Germany hundreds of municipalities have de-privatized electric utilities, restoring public control and driving one of the world’s most rapid shifts to renewable energy.

That last trend exemplifies one of Klein’s most important points, the urgent need to push back the attack on the public sphere by the market fundamentalism that has prevailed since the 1980s – the philosophy that government can do no right and the market can do no wrong.  From responding to disasters such as Katrina or Sandy to rapidly advancing clean energy, a rebuilt public sector is crucial, she says.  Klein’s subtitle, “Capitalism vs. the Climate,” has spurred criticism and misunderstanding that she is calling for an end to capitalism as the precursor to solving the climate crisis.  Klein’s real point is that we must begin changing the balance of power.

“There is plenty of room to make a profit in a zero-carbon economy; but the profit motive is not going to be the midwife for that great transformation,” she writes.

Instead, a turn back to communitarian values will be the motive force:  “. . . any attempt to rise to the climate challenge will be fruitless unless it is understood as part of a much broader battle of worldviews, a process of rebuilding and reinventing the very idea of the collective, the communal, the commons, the civil, and the civic, after so many decades of attack and neglect.”

In a season that has seen the People’s Climate Mobilization in New York and around the world, with a visibly broader spectrum coming to the climate cause, Klein’s This Changes Everything is the book of the moment.  Klein has sighted the path to climate victory in integration with a larger progressive movement, and victory for the historic thrust of progressive movements in a unifying focus on climate.   The struggle will be long and difficult, but working together there is a chance to build the better world of centuries’ aspiration.  Klein has drawn a prospect of immense hope out of a deep crisis that can so easily induce despair.  That is the genius of this book.  Read it.

The This Changes Everything site is here, including Naomi’s book blog. Buy the book here or at an independent bookseller.

Posted by Patrick Mazza at 7:48 AM