Remembering Lac-Mégantic: How to stop human sacrifice for oil

This is the text of a talk I gave yesterday at a rally and die in outside a Seattle Mariner’s game, recalling the Lac-Mégantic oil train explosion July 6, 2013.  We did it at the ballgame to call out the fact BNSF is running the same explosive oil trains by events attended by tens of thousands, posing the danger of far more deaths than the 47 which occurred in the Quebec border town. I spoke about solutions to move us beyond oil, ranging from electric vehicles to better transit and affordable housing near jobs, as well as the need to stop road-building binges such as the one Washington State Legislature just voted to fund.  Citizens need to hold politicians’ feet to the fire for better alternatives.

We are here today to honor the memories of 47 people who died at Lac-Mégantic two years ago when their town was incinerated by a runaway oil train.  The particular tragedy is that they died for no good reason. They were a human sacrifice made to maintain the age of oil-powered transportation. 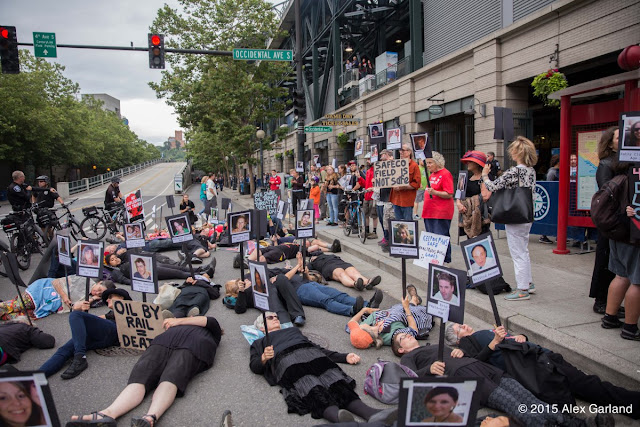 And let’s be clear, oil is a transportation issue.  Relatively little is burned to generate electricity.  But 97% of the world’s transportation vehicles run on petroleum.  We need to keep oil in the ground to save our climate, to keep explosive oil trains from running through our communities, and to stop environmentally destructive oil extraction in the Arctic, the tar sands and the oil shales.  To do this we need to stop relying on oil to run our cars, buses, trucks and trains.

First, we need to shift most of our ground vehicles from oil to electricity, and we need to generate that electricity from renewable sources such as the sun and wind.  We are just at the dawn of the new electric vehicle age.  EV’s are just a tiny fraction of all cars sold.  But worldwide EV sales went up by almost four times in 2014 to 360,000, and they are holding at that rate this year even with lower gas prices.  Every major automaker has an EV program. Costs are coming down and range is improving.  Within five to seven years EVs will be cost competitive with gasoline vehicles.  They will be a mass market option.

Fully electric city buses are also on the way.  We can electrify transit fleets.  We also can electrify railroads, as is already done in much of Europe and Asia.  I am working with a Backbone Campaign project called Solutionary Rail aimed at running railroads on renewable electricity, taking freight back from trucks and roads and restoring rail as a major option for intercity passenger travel.

We have the renewable energy sources to run our vehicles.  Solar and wind energy are now becoming competitive with fossil fuel electricity.  Since 2013 the world has added more renewable energy each year than fossil energy, and the gap continues to grow.  By 2050, and we hope sooner, solar is projected to be the world’s biggest energy source. To meet the climate challenge, which demands we reduce carbon emissions at least six percent a year, we need to accelerate these trends with public policies such as carbon pricing and direct support for purchases.   But the point is we have the technologies we need to get out of oil-fueled transportation and fossil fuels in general.  We just need to beat back the power of the fossil fuel industry that wants to keep us hooked on their climate twisting products.

We can make our energy sources clean.  But we can’t stop there.  We must also use less energy.  We want the cars we drive to be electric, but we also want there to be less need to drive cars.  We don’t just want to replicate our car-choked sprawling cities on electric drive.  We need to change our communities to be places where there is not so much drive to drive. How do we do this?

We need much better mass transit and public transportation service, much as European and Asian cities already have.  We should have bus service at least every 10-15 minutes during the day and evening on major routes.  We should also start to create bike lanes fully separated from traffic as they have in cities like Amsterdam and Rotterdam, where bike commuting is a major option.  That means taking out parking strips to create bike lanes.

We need to fight for better transit and bike access.  We need to take part in city politics to make this happen.  We supposedly have a climate plan in Seattle that will reduce our auto carbon pollution over 80 percent by 2030.  But it isn’t making its way into the city’s draft land use plan, which only projects a 23% reduction by 2035.  We are already falling far short on our city climate goals.  We need to hold our city officials’ feet to the fire to begin making real carbon reductions, and transportation is the biggest challenge.  350 Seattle will be doing just that.  Come join us to help make it happen.

There is a huge social justice angle to all this.  More and more people cannot afford to own an automobile.  We need to provide them with decent transit and biking options. We also need to create more affordable housing near jobs.  People who work in Seattle increasingly can’t afford to live in Seattle.  They are being pushed out of the city to make long commutes to work.  We should support Councilmember Kshama Sawant’s campaigns for rent control and for a bond issue to build affordable housing.  Affordable housing and public transportation options are where climate meets justice meets oil reduction. 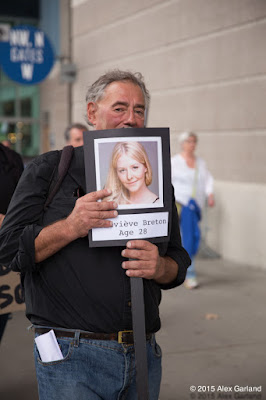 Finally, we just need to stop building new roads. The Washington state legislature just passed a bill funding one of the biggest road building binges in Washington state history.  Nearly $9 billion for new roads compared to a paltry $650 million for transit and biking.  Most of our Democratic Party state legislators voted for it, and Gov. Jay Inslee supported it.  Greenest governors do not support massive road building binges.  Study after study shows the more roads you build, the more traffic increases.  For this reason 350 Seattle joined with Sierra Club, WASHPIRG and former Seattle Mayor Mike McGinn to oppose the transportation package.  We lost this one, but we need to come back and insist on a transportation policy that emphasizes alternatives to the automobile.

We can move out of oil in transportation.  We have the solutions that provide us with clean fuels, and which allow us to use less fuel overall.  We don’t need to sacrifice people like those who died at Lac-Mégantic, nor do we need to sacrifice our waters and oceans to oil spills, or our climate to devastating disruptions.  We just need to act as citizens to demand the policies and investments that will make the change.  Come join us in making those demands.