This is an update to a story posted earlier today.

Washington Governor Jay Inslee today ordered the state Department of Ecology to place a regulatory cap on carbon emissions.  While a successful youth lawsuit to spur such an action is not being given direct credit, it is hard not to see the connection.

“Carbon pollution and the climate change it causes pose a very real and existential threat to our state,” Inslee said. “Farmers in the Yakima Valley know this. Shellfish growers on the coast know this. Firefighters battling Eastern Washington blazes know this. And children suffering from asthma know this all too well and are right to question why Washington hasn’t acted to protect them.”

Inslee is claiming regulatory authority under the state Clean Air Act. The rulemaking is expected to take a year. The action will provide Inslee a potential opportunity go to the U.N. Paris climate summit in December with a climate initiative of global significance.

In August 2014 a group of eight youths petitioned the state Department of Ecology to start a rulemaking for carbon caps much as the governor ordered today. Ecology rejected the youth petition.  Represented by the Western Environmental Law Center, they took Ecology to court. On June 23 in a decision unprecedented in the United States, King County Superior Court Judge Hollis Hill ordered Ecology to reconsider the petition based on scientific testimony and their own statements. 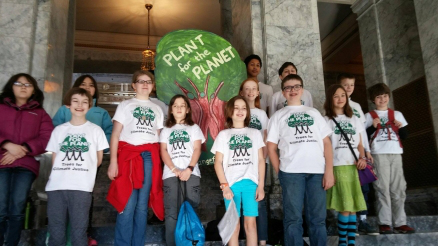 Of critical importance, the youth petition affirmed that existing laws provide Ecology with all the authority it needs to regulate carbon emissions. The governor today took the same position.

But the governor’s press spokeperson, David Postman said, “As far as I know, this effort is not related to the lawsuit against Ecology.”

Nonetheless it hard to believe that these developments are not connected.  Ecology is under the gun from Hill's court order.  Andrea Rodgers, lead attorney in their case, has a similar view. “The only ones who asked the governor to do this are those kids. They deserve the credit.”

What is not clear from the governor’s announcement is how far his order will go to implement science-based goals. The announcement says, “The regulatory cap on carbon emissions would force a significant reduction in air pollution and will be the centerpiece of Inslee’s strategy to make sure the state meets its statutory emission limits set by the Legislature in 2008.” State carbon emission limits are substantially higher than the level required by science.

“We’re going to make sure that whatever Ecology does is based on the best available science,” Rodgers said.  “When we meet with Ecology tomorrow we are going to ask that they heed Judge Hill’s order.”

In her order Hill quoted Ecology’s own December 2014 report to the governor.

“Climate change is not a far off risk.  It is happening now globally and the impacts are worse than previously predicted, and are forecast to worsen . . . If we delay action by even a few years, the rate of reduction needed to stabilize the global climate would be beyond anything achieved historically and would be more costly.”

Ecology itself admitted the 2008 goals fall short: “Washington State’s existing statutory limits should be adjusted to better reflect the current science. The limits need to be more aggressive in order for Washington to do its part to address climate risks and to align our limits with other jurisdictions that are taking responsibility to address these risks.”

Noted Hill, “Despite this urgent call to action, based on science it does not dispute, Ecology’s recommendation in (the December 2014) report is, ‘that no changes be made to the state’s statutory emission limits at this time.’”

Judge Hill wasn’t buying that.  She told Ecology to take its own report and scientific testimony into account and reconsider the youth petition. That is what the agency will have to do.

The regulatory cap will not in itself set a carbon price as would have the governor’s failed carbon bill.  But that could come by future legislative action or a ballot measure. A carbon tax is the center of Initiative 732 being forwarded by Carbon Washington for the November 2016 ballot.

“This is not the comprehensive approach we could have had with legislative action,” Inslee said. “But Senate Republicans and the oil industry have made it clear that they will not accede to any meaningful action on carbon pollution so I will use my authority under the state Clean Air Act to take these meaningful first steps.”

Inslee also announced he would not implement a Clean Fuels Standard because it would have triggered a “poison pill” taking around $2 billion away from transportation alternatives including transit, bicycling and walking.

"In talking about the terrible choice the Senate imposed on the people of Washington – clean air or buses and safe sidewalks – I heard broad agreement that we need both clean transportation and clean air,” Inslee said. “I appreciate the commitment I heard from many to work with me to ensure our state meets its statutory carbon reduction limits.”

(I previously wrote that my gut told me Inslee would swallow the “poison pill.”  In this case I’m glad my gut was wrong.  Clean fuels should not be played against needed alternatives.)

Inslee’s announcement today signifies a tremendous climate victory.  Whether or not they are given direct credit I believe can thank eight young people and the adults who backed them up.

Posted by Patrick Mazza at 3:57 PM